Hi,
I wanted to put up a quick note on how to use Kalman Filters in OpenCV 2.2 with the C++ API, because all I could find online was using the old C API. Plus the kalman.cpp example that ships with OpenCV is kind of crappy and really doesn’t explain how to use the Kalman Filter.
I’m no expert on Kalman filters though, this is just a quick hack I got going as a test for a project. It worked, so I’m posting the results.

END_OF_DOCUMENT_TOKEN_TO_BE_REPLACED

I’ve seen some examples of people who build motion parallax capable screens using Kinect, but as usual – they don’t share the code. Too bad.
Well this is your chance to see how it’s done, and it’s fairly simple as well.

END_OF_DOCUMENT_TOKEN_TO_BE_REPLACED

I found a nice little trick to ease the work with the very noisy depth image the Kinect is giving out. The image is filled with these “blank” values that basically note where the data is unreadable. The secret is to use inpainting to cover these areas and get a cleaner image. And as always, no need to dig deep – OpenCV has it all included.

END_OF_DOCUMENT_TOKEN_TO_BE_REPLACED 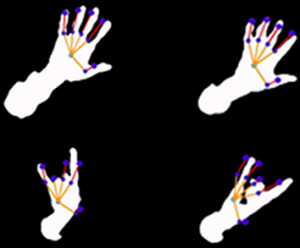 Hi
Just wanted to share a thing I made – a simple 2D hand pose estimator, using a skeleton model fitting. Basically there has been a crap load of work on hand pose estimation, but I was inspired by this ancient work. The problem is setting out to find a good solution, and everything is very hard to understand and implement. In such cases I like to be inspired by a method, and just set out with my own implementation. This way, I understand whats going on, simplify it, and share it with you!
Anyway, let’s get down to business.
Edit (6/5/2014): Also see some of my other work on hand gesture recognition using smart contours and particle filters

END_OF_DOCUMENT_TOKEN_TO_BE_REPLACED

Hi
Another quicky on how to use Kinect (libfreenect) with OpenCV 2.1. I already saw people do it, but havn’t seen code.
UPDATE (12/29): OpenKinect posted very good C++ code of using libfreenect with OpenCV2.X APIs: here it is. Plus, their git repo now has a very clean C code: here it is.
So here it goes

END_OF_DOCUMENT_TOKEN_TO_BE_REPLACED

Hi!
Long time no post… MIT is kicking my ass with work. But it was amazing to come back to so many comments with people anxious to get OpenCV going mobile!
Anyway, just wanted to share my work on object detection using OpenCV2.1 on the Android.

END_OF_DOCUMENT_TOKEN_TO_BE_REPLACED

Hi,
I’ll present a quick and simple implementation of image recoloring, in fact more like color transfer between images, using OpenCV in C++ environment. The basis of the algorithm is learning the source color distribution with a GMM using EM, and then applying changes to the target color distribution. It’s fairly easy to implement with OpenCV, as all the “tools” are built in.
I was inspired by Lior Shapira’s work that was presented in Eurographics 09 about image appearance manipulation, and a work about recoloring for the colorblind by Huang et al presented at ICASSP 09. Both works deal with color manipulation using Gaussian Mixture Models.
Update 5/28/2015: Adrien contributed code that works with OpenCV v3! Thanks! https://gist.github.com/adriweb/815c1ac34a0929292db7
Let’s see how it’s done!

END_OF_DOCUMENT_TOKEN_TO_BE_REPLACED 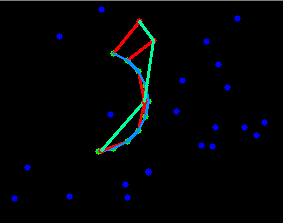 ICP – Iterative closest point, is a very trivial algorithm for matching object templates to noisy data. It’s also super easy to program, so it’s good material for a tutorial. The goal is to take a known set of points (usually defining a curve or object exterior) and register it, as good as possible, to a set of other points, usually a larger and noisy set in which we would like to find the object. The basic algorithm is described very briefly in wikipedia, but there are a ton of papers on the subject.
I’ll take you through the steps of programming it with OpenCV.