Number Saver has been around for a while, but when I got around to it, it was always

about the features. I felt the time is right to polish (even a bit) my Android UI skills and try and make it.
A lot of design ideas later, few tips from designer friends, and my rusty Photoshop skills, eventually came up with this design: 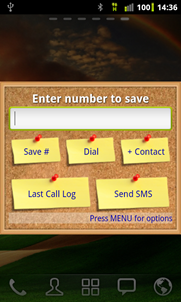 For those of you who are not familiar with this app – its goal is to solve a very annoying missing functionality in Android phones; functionality that existed on each and every “pre-smartphone” models.
This app will let you easily take a note of number or text string while you’re in a call. Assuming the number or note is given to you by the other call party.
Such assumption is supported by the feature to automatically start the phone’s speakerphone while the app is opened so you can hear the other party while typing the number.
Later on you can return to the app, and the number will appear for you to dial, add a contact, or send SMS.
The app saves the number either in the phone’s clipboard so you can later “paste” the number wherever you want, or in its internal memory
Surprisingly – I got a comment from someone who said she prefers the old look. So now there’s also an option to start the app with the old look.