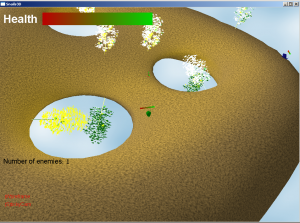 Hi
The graphics course I took at TAU really expanded my knowledge of 3D rendering, and specifically using OpenGL to do so. The final task of the course, aside from the exam, was to write a 3D game. We were given 3 choices for types of games: worms-like, xonix-like and lightcycle-like. We chose to write our version of Worms in 3D.
I’ll try to take you through some of the problems we encountered, the decisions we made, and show as much code as possible. I’m not, however, gonna take you through the simple (yet grueling) work of actually showing meshes to the screen or moving them around, these subjects are covered extensively online.
The whole game is implemented in Java using JOGL and SWT for 3D rendering. The code is of course available entirely online.

In the begining there was mesh

Our game is a turn-based shooter, Worms-like. The players are supposed to walk on the face of a world mesh (a 3d structure), and shoot missiles at each other.
When it comes to positioning and aligning 3D objects on top of other 3D objects, I must say I was overwhelmed by the complexity. Its really not that easy to do, but once you get the idea its easy.
So you have an arbitrary 3D object, and you want another object to “walk” over it. Few things you need to know:

Now, to align the object you have to make it be oriented upwards from the mesh and point in the forward direction. So before drawing the player object make the model-view matrix face the right direction. For this we ported some CPP code that does exactly that:

Another key point in our game is making the player character walk smoothly on the mesh. The instructions for this exercise were that we have to make the player either walk from vertex to vertex, from edge to edge or the most complicated option – an arbitrary point on the mesh to another. We chose to make the player walk from edge to edge.
Say that the player object is on an edge. To make it walk to another edge we needed to know what are the possible edges that it could reach. For that we created a half-edge structure of the world mesh. Then when we query the structure we can get in constant time the neighboring edges to the player (typically the one-ring of both vertices of the current edge he’s standing on). We only have to choose from the list of edges which edge the player should go to, and where on that edge he will “land”. This is done by choosing the edge with the closest point to the approximation of the players next location.
Let me explain:

We actually check what is the intersection point of the approximate edge with the line that goes from the player and in the forward direction. This is the point the player should be if it walked from his current position to that edge.
Orchestrating:

Of course when the player gets to his next location, he needs to get the correct up-direction and forward direction. This can be taken from the next edge’s vertices that hold normals.
There are some additional issues to traversing the mesh:

Make a dent in the world

One more interesting issue is the missiles impact on the world. Naturally, we’d like the missiles that hit the ground to make a dent in the world. Our solution was to take the 1-ring of the hit vertex, and lower all the vertices on the ring in the opposite direction to their normals.

if pigs (missiles) could fly…

So far I’ve covered mesh oriented movement. Missiles, however, are not mesh-bound – they fly around “freely” above the mesh. To imitate gravity and a “steep course of flight” for the missiles, we use Bezier curves of either 3 or 4 keypoints.
To calc a point on the curve all you need to know is the current time of flight.

Get ready for impact!

Particle systems are a decent way to simulate smoke, fire, water splashes and anything “particley”. We ripped some C code from the net (I can’t remember where, but it was GPLed), again, and ported it to Java.
The only problem is that OpenGL can’t really display particles, you need something that has some kind of surface, or a line. Other options are drawing GL_POINTs, or GLU spheres, but both options either don’t look pleasing or are very costly in terms of performance. So we used GL_TRIANGLE_STRIP to draw small rectangles of random sizes as the particles.

Note that we make sure the “particles” are blended into the buffer, as particles’ color is fading as they near death.

OK, I’ve tried to share most of the interesting points in the making of the game. The code is downloadable from the Google code SVN repo. And here’s a short video explaining some aspects of playing the game:

Thanks for tuning in!
Roy.