Got an hour-long video and not really into manually creating subtitles? not plans to put it on YouTube for their automated transcription services? then – try Google Cloud Speech-to-Text! In this post I’ll share some scripts for automating the process and creating an .str file to go along your video for displaying the subtitles.

END_OF_DOCUMENT_TOKEN_TO_BE_REPLACED

So, I’ve been trying to stream audio off of a USB microphone connected to an Arduino Yun.
Looking into it online I found some examples using ffserver & ffmpeg, which sounded like they could do the trick.
However right from the start I’ve had many problems with playing the streams on Android and iOS devices.
Seems Android likes a certain list of codecs (http://developer.android.com/guide/appendix/media-formats.html) and iOS like a different set of codecs (Link here), but they do have on codec in common – good ol’ MP3.
Unfortunately, the OpenWRT on the Arduino Yun has an ffmpeg build which does not provide MP3 encoding… it does have the MP3 muxer/container format, but streaming anything other then MP3 in it (for example MP2, which the Yun-ffmpeg does have) simply doesn’t work on the Android/iOS.
From experiments streaming from my PC a ffmpeg/libmp3lame MP3 stream, it looks like the mobile devices are quite happy with it – so I will need to recompile ffmpeg with Lame MP3 support to be able to stream it.

END_OF_DOCUMENT_TOKEN_TO_BE_REPLACED

I haven’t found a CMake module to find FFMPEG libraries, so I wrote one (a while back) and I thought to share it.
It will look very hard in order to find it on *nix and Win all the same, and I found it useful.
Get the gist: https://gist.github.com/royshil/6318407

I wish to report of a number of tweaks and additions to the hand silhouette tracker I posted a while back. First is the ability for it to “snap” to the object using a simple Active Snake method, another is a more advanced resampling technique (the older tracker always resampled after every frame), and of a number of optimizations to increase the speed (tracker now runs at real-time on a single core).

END_OF_DOCUMENT_TOKEN_TO_BE_REPLACED 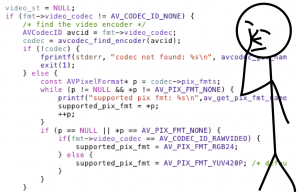 So animated gifs are awesome if you’re writing a software blog. It saves all this time working with YouTube embeddings and stuff, and your “videos” are stored locally. The simplified FFMPEG writer was before unable to output animated GIFs, but I’ve tweaked it and now it does. It’s also a nice piece of code to learn how to FFMPEG in C.

END_OF_DOCUMENT_TOKEN_TO_BE_REPLACED

I want to share a little snippet in case anyone is interested in writing video files from cpp context using FFMPEG, I’ve made it for usage with OpenFrameworks.
It’s basically a simple wrapper around the encoding mechanism of FFMPEG, so you can easily just say which file to write to and start dumping images into it. It will take care of choosing the codec, writing headers and trailers, encode (compress) the frames and write them to the file.

END_OF_DOCUMENT_TOKEN_TO_BE_REPLACED

Hello
Quickly sharing some useful scripts I’ve “developed” over the summer to cope with some image resizing / video ripping / transcoding, etc.
Instead of using some specialized GUI software for transcoding I thought why not simply put useful options in the Windows file browser “Send To…” context menu. That way I can right-click the file I want to work with and just send it to some tool to do the job.
Here it is…

END_OF_DOCUMENT_TOKEN_TO_BE_REPLACED

Hi
I’d like to share a quick tip on rotating video files.
I’m always frustrated with taking videos with my phone. Single handedly it’s easiest to do it when the phone is upright and not in landscape mode. But the files are always saved in landscape mode, which makes them rotated when you watch.
Although there are plenty of GUI software to do it, using the command line is faster and can also be batched!