Hi
Morning traffic jams can really bum you out on some days, and most people try to avoid them. But actually doing it takes a bit of practice and a lot of time, so it took me just 3 years to perfect my morning route to work. I think I am now able to shave off between 5 and 20 minutes of traffic every day, depends on how crowded the roads are that day.
On a “light” day these tips aren’t worth much, but on a crowded day (like today) it can really save time and gas. Also, since this is my route to work, and I live in Israel and work in Ramat Ha’hayal Tel-Aviv, the example images are in Hebrew and they help people who need to get to Habarzel street. But the tips are genuine, and can help anyone optimize thier morning route.
OK, so on to the point.
My route is about 9-10 km, very short, but some days it can take up to 40 mins to get into work. Most of the problem is caused by traffic lights, which are terribly unbalanced for some directions. So tip #1 is: shift the lights balance to your favour. Change the route to take the better, longer green lights.
Here’s an example: 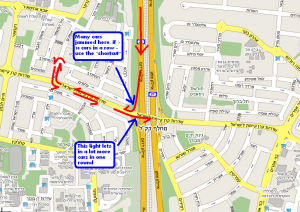 This is an actual traffic light which is unbalanced towards the people on “Keren Kayemet” (the yellow road). Every morning there’s a congestion on the side of the people coming from the highway.
My trick is to skip the direct left turn, which is unbalanced (can be 3 min for a green of 15 sec), and after a short round trip in the neighbourhood I take the same light but in the more favourable direction. On a heavy day this can save over 10 min of just sitting in the car waiting for the short green.
Next tip, #2: Take the lighter road, even if its longer.
Another example:

There are shortcomings to going through the neighbourhoods like: pedestrians, driving school cars (and trucks!) that go about slowely, speedbumps and the occasional police car. But in some cases its worth it if in the end you take the better direction.
Last tip, #3: explore your route. Every few weeks explore the streets around your usual route, even if it takes a few more minutes, you might just hit that secret path no one ever takes!
Have a safe morning trip!
Roy.