I wanna share some code for 2D curve tracking with a particle filter, implementing the body of work of Tony Heap and David Hogg. These guys presented a relatively easy to implement method for tracking deformable curves through space and change in form using a Hierarchical Point Distribution Models (HPDM), which is another elegant way to store shape priors. Granted, it is not perfect, but for a simple 2D shape like a hand it works pretty good, and rather fast as well.
Let’s dive in then,

An HPDM is basically a Point Distribution Model (PDM) that has multiple levels – a hierarchy. It encodes the deformation a shape can go through, usually by means of dimension reduction (in our case a PCA). In the Hierarchical PDM we generate a shape-deformation space by PCA, then discretize that space using clustering (like k-means, but an Expectation-Maximization operation works just as well) to achieve another level in the hierarchy.
To train the HPDM we need (many) samples of curves. I got the samples automatically using a Kinect, blob detection, curve extraction etc., but that wasn’t the end of it. The samples needed a lot of clean-up!
The raw samples contain the whole arm, which is not something I’d like to track and also it throws off the alignment of all the curves because the variance is big.

So I clean it up a bit by looking a bit further down the curve. But since we’re doing an ad-hoc curve extraction from the blob, simply “capping” the curves at a certain point along the curve creates curves that are very badly aligned. For an ideal alignment we need them to be the same exact length (in points), and we need the points to be distributed along the shape in the same way, e.g. point #120 lands on the tip of the index finger in all curves. 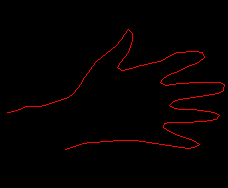 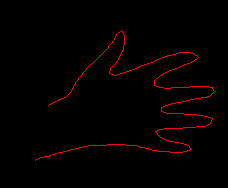 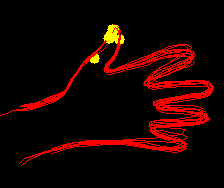 Since we’re building a PDM, we model the variation of a single point in the curve (like the 100th point), so we need the variation to be small. We therefor look for an alignment.
We start by picking an initial “mean shape”, which in the first iteration is simply the average curve from all samples. But as we’ve seen a single point can vary greatly so the initial average shape does not reflect the true mean shape.
We proceed by examining each curve, matching vs. the mean shape, adding points at the start or end of the curve so they would align. Now the “100th point test” yields better results, the 100th points are roughly at the same position. 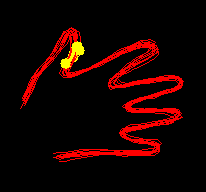 After k-means-ing, the paper then continues to say that the “subregions” (sometimes called “patches”) of the shape deformation space should be local, and thus hopefully linear.
They do not use the samples that were attached to each center (that’s how k-means clustering works, attached samples to centers thus clustering the samples in space), but rather they look for nearest neighbors in the shape space, to get an overlapping area between subregions / patches.
Then they perform PCA on each bunch of NNs around each center to get a linear patch.
Here are the patches with slight deformation on the principal axis:

The core parameters to tweak in the HPDM are:

Using the HPDM in a Particle Filter

A quick reminder, Particle Filters (PF) are a way to maintain many different hypotheses for the model (e.g. position of an object, shape, signal, etc.) looking for an unknown truth state of the model while receiving noisy measurements.
In our case we’re looking at the position, orientation and shape of a 2D hand object, so each particle is going to hold data that will describe such a model.

To employ the PF we need to learn something about the shape – how it changes over time. The PF (a stochastic Markovian process) is dependent of the last iteration to determine the next, we therefore need to extract a shape variation model using the HPDM.
So we go back to the samples, this time looking in chronological order for the relationship between the shape in one frame and the next frame. This can give us an idea of how the shape changes through time, and thus can be used as a prior for the PF.
To that end we construct a transition matrix, one that tells us what is the probability of transforming from shape described by patch i to a shape described by patch j. Easily we just go over the curves sequentially and accumulate the transitions. Most of the frame-to-frame transitions are going to remain in the same patch… 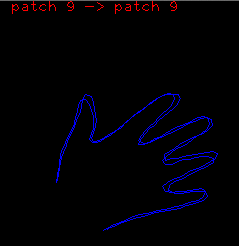 In the end we get a transition matrix: 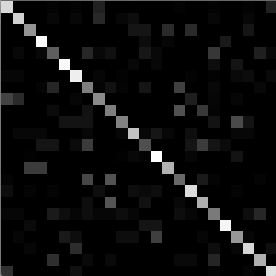 But we also need a cumulative version of it (accumulating per row) that we will use in the particle filter.

Particle filters work by assigning a score for each particle on how well it performs in this iteration, so that in later iterations we sample new particles that will partly preserve this strength but also be open for new hypotheses.
To evaluate how good a particle is we examine it’s adherence to edges in the image. Since I am working with a binary mask from the Kinect it has very strong and clear edges, but this method works the same way for regular images. 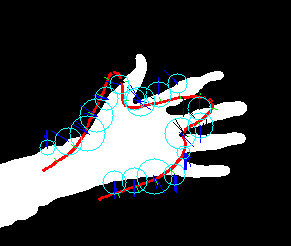 The red line is the hypothesized shape in that particle, the cyan circles mark if an edge was hit along the normal to the curve.
Scores are given based on how many edges were hit, and if they are pointing in the right direction (i.e. the edge is aligned with the curve).

The standard PF part is normalizing weights of the current particles, and create the cumulative sum which is essential for easily choosing a

We then resample new particles form the distribution we created with the current bunch of particles and the cumulative sum (this is called Sequential importance resampling):

In their paper Heap&Hogg suggest we combing a few local optimization iterations with each step of the PF, and claim (rightfully) that it results in faster convergence and better results. The meaning of “local” means that we run it on the same frame a number of times, inside one iteration of the PF.
To help the particles attract to the edges in the image, I try to find a rigid transformation that will decrease the energy of attraction to edges. This is a risky operation as it can throw the curve completely out of balance if the initial guess is no good.

To make the PF function we need to “propagate” the error through the particles. Basically meaning we need to put in some randomness in the process or else it quickly converges and gets stuck.
I therefore use the transition matrix to see where each particle-shape likes to go (or, is likely to go). Actually the cumulative transition matrix: 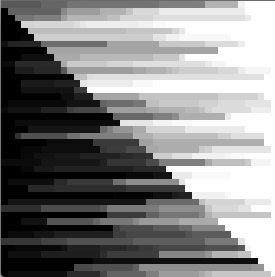 Each particle then is added some random noise so the filter will not converge and actually be able to cope with movement and deformation of the shape.

Getting the best guess of the PF

Simply by looking at all the particles at a given moment, we can take the best ones and average over them.

You can grab the code with a usage example here: http://web.media.mit.edu/~roys/src/HHParticleFilter.zip
Thanks!
Roy.